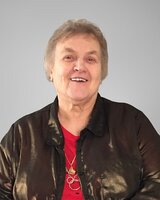 Peacefully, at Pinecrest Nursing Home, Plantagenet on Friday, October 21, 2022 at the age of 75.

After running a successful farm in Belgium, Christiana move to Canada with her young family in 1981 and built a successful dairy farm in Lefaivre, Ontario.  She was a dedicated mother first and foremost. She treasured her children and grandchildren and embraced every moment with them. She especially loved her role as Moumou. She had a vivacious personality and always made people around her laugh. She made friends everywhere she went.  Retiring young, Christiana spent her golden years having an active social life in the Euro Club and playing cards with her many friends. She was a social butterfly her entire life.  She loved deeply and cared for all those that came into her life. She loved to shower her loved ones with smiles, devotion, and gifts.

A Celebration of Christiana’s Life will be held at a later date.

Memorial donations made to Hawkesbury and District General Hospital - ICU Department would be appreciated by the family.